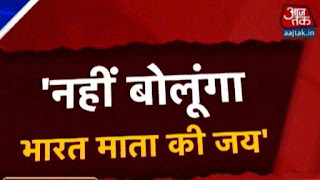 “Bharat Mata Ki Jai / Jay” roughly translates to ‘Hail’, ‘Salutations’ or ‘Victory’ to ‘Mother India’. The key words are:
– Bharat [India]
– Mother
– Victory / Salutations
When the Muslims loudly proclaim Hindustaan Zindabad, Bharat Zindabad, Hindustaan Paindabad, Bharat Amar Rahe etc, and go on to assert that “Sare Jahan Se Accha Hindustaan Hamaara” [Our India is the Best of All Nations] there can be no doubt that ‘Bharat’ and ‘Victory’ are not being contested by them at all. Muslims of Pakistan will not say Pakistan Mata / Pita ki Jai, Saudi Muslims will not say it for SA, nor the Iranians for Iran.
‘Mother’ is the personification of an impersonal entity, and acquires the powers of a giver. This, according to a rigid interpretation of Islam, is not permitted. For the Hindutva votaries chanting this alone is the true test of patriotism. Their underlying demand comprises:
– Call India “mother”
– Hail her, pay salutations to her
– And say so in Sanskrit
Let us now shift the argument. The Muslims – at least the Wahabi variety – believe that:
– All land is God’s or Allah’s
– There is no God but Allah and that no one else can give or take anything whatsoever. That His power to bestow is unshared and undiluted. And any attempt to share in or divide this sole prerogative with anyone, is considered Shirk [polytheism] and deserves the strictest opposition. Idol worship happens for them to be the worst form of polytheism.
– They are charged to establish Allah’s suzerainty on all earth and so they will use violence in this cause with impunity. And if, in the process, they perish, they will go to Heaven.
IS – the Islamic State, the Daish, claims precisely this.
Just ask: between one’s God and one’s nation the former must weigh greater. So, when IS perpetrates violence in pursuit of their truth, why do we fault them? They just want the rest of us to proclaim what they genuinely believe to be true, and in the manner in which they assert it.
Is there any real difference between the approaches of the two: IS and the Hindutva? Neither is allowing the rest of us to stick to the spirit of the proclamation, with which we have little problem. But both want it exactly their way.
Can we not translate this Sanskrit proclamation into ordinary Hindustani or Urdu, substitute ‘Mother’ with ‘Nation’ or ‘Country’ [which it is], and “Jai” with ‘Love’, ‘Respect’, ‘Zindabad’ [amar rahe] or something else like this or even stronger than this, and test the Muslim patriotism?
Insisting on using precisely their wording appears as obstinate as that of IS.
You decide.
Tags: Aaj Tak Bharat Mata ki Jay hindu

We have often heard the lament that Muslim boys elope...

Young Muslim Boys and Girls, Undoubtedly you are passing through...